While my peppermint tea is steeping on this cold, rainy day, I feel like I should write a blog post. All around me people are jumping into NaNoWriMo (or alternatively, NaBloPoMo) and here my blog sits: neglected.

Thank you all for the lovely comments on Snowflakes! I joke about how long it took, but really I do feel like I've accomplished something. However, the astute or stalkerish among you will probably have noticed that my comments to that project on Ravelry start with "This is my giant square shawl warm-up, so to speak.". Yes - with Snowflakes off the needles, I am in theory supposed to be resuming work on Queen Susan. And Evenstar. Hah! (I'll let you know how that goes. After Christmas, most likely.)

Just because Christmas is right around the corner, I've been knitting away picked up a new hobby. I'll pause while you marvel at my superb sense of timing.

Needle tatting. Easier than you think!


I really have been knitting: trouble is, it's a) secret and b) hard on my hands, so it's slow going. Here, I'll show you a sneak peek:

I just love this cable!


I finished a BSJ for the Thursday night KAL at Hearthstone Knits. The vast majority of the knitting was done while my brother and I were driving to and from Ohio a couple of weekends ago. The yarn is Regia Hand-dye Effect, and I love the colors but I'm not crazy about the texture. It's essentially a very loosely spun single plied with a black thread, and it's coarser than I expected. I'm not at all sure how it will hold up.

It goes more quickly than you think!


While DH and I were in St Thomas a couple of weekends ago for the wedding of some wonderful friends, I needed some plane knitting (not to be confused with plain knitting). I have a sock OTN, of course, but I'm having problems with it because I just don't seem to be able to internalize the pattern. Also, it's on wooden dpns and I really hate wooden dpns. (Admittedly, if the first problem were more soluble I would be more inclined to solve the second.)

So, I brought the next best thing: lace. 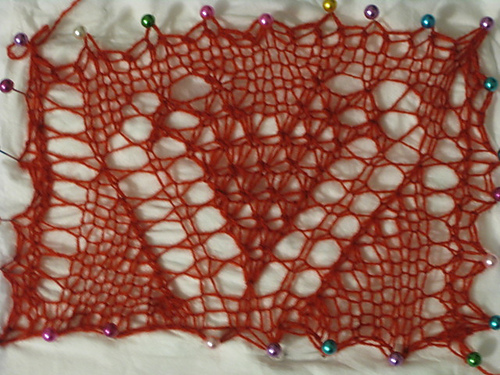 The swatch for Mystic Desire, originally a mystery KAL from Anna Dalvi. I forgot to bring the shawl upstairs for the photo-fest this morning.


I've been spinning more than knitting lately. My "to-ply" pile is growing larger... I tell myself that I'm just waiting until I get my spinning wheel at Christmas from Spunsilver Creations. The problem with that, obviously, is that I'm going to need to spin for awhile on it in order to get the feel of it, which means MORE singles...

That's 3oz of hot pink merino, 4oz of purple and whiter merino/bamboo, 1 Abbybatt in Girly Camo which is waiting for a plying friend, and half of the huayaca alpaca from Strange Folk Fest.


I did have enormous fun at this month's Spinning Meet-up! A couple of people kindly brought their drum carders, and allowed us to make all kinds of batts from the huge pile of donated fibers. (I got rid of a few bags of random merino and sari silk that way.)
I wasn't really in the market for an art batt, but I did have some problematic suri alpaca - the same that I tried to spin for Tour de Fleece and failed because it categorically refused to draft. It wasn't felted, exactly, but was so compacted that it was unpleasant if not close to impossible to spin.

However... A drum carder and a bit of similarly long-stapled tussah later, and I cannot WAIT to get back to it!

It feels as good as it looks!


Hopefully I will be able to borrow the carder again next month to do the 2nd half of the alpaca. (Anyone know of a drum carder for sale? ;-) )

We're gearing up for the new World of Warcraft expansion on Dec. 7th. I'm really loving the redesign of Stormwind (well, the melting parapets are disconcerting, but visually the city is unbelievable). The reorganization of the zones, etc, is going to take some getting used to but overall it's not the massive change that I'd feared. I'm leveling my hunter to get a feel for the new order of things.


Tagged as: WoW, knitting, life the universe and everything, spinning, travel